What is superstition and how it began?

Superstitions began centuries ago when our ancestors tried to explain mysterious circumstances or events as best as they could with the knowledge they had.
For instance, before the development of science explained such strange things as why mirrors show our reflections or why shadows appear when it’s sunny, ancient people reasoned that a shadow or reflection was part of their soul.
If someone broke something onto which the shadow or reflection appeared, people believed that their soul was harmed. Therefore, when a person broke a mirror it was considered unlucky or harmful.
Today we know that reflections and shadows are not part of our souls but if someone still believes it is bad luck to break a mirror they are said to be superstitious.
So a superstition is a belief or practice that people cling to even after new knowledge or facts prove that these silly beliefs are untrue.

And one of the most popular superstitions is that the number 13 is bad luck. 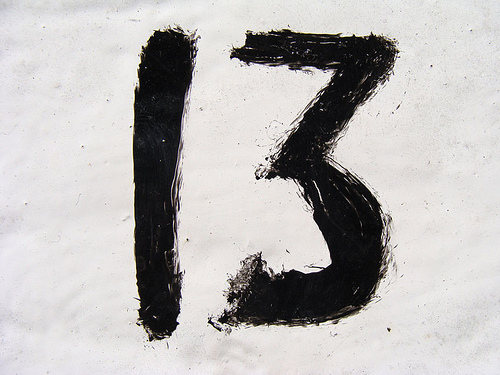 Did you know that fear of 13 has an official name? Yes, it really does!

It is called TRISKAIDEKAPHOBIA, and it affects many people in our society.
It has been estimated by various sources that U.S. businesses lose millions of dollars because of canceled appointments on 13th Friday. 41% of people Britain fear the number 13, especially if the date is Friday 13th. So they don’t leave their homes, or refuse to have operations on that day.
What is absolutely fascinating is that there is no explanation for this fear – TRISKAIDEKAPHOBIA (fear of the number 13). But, here are some interesting observations:

In the late 1800s, there was a group called “The Thirteen Club”. Their goal was to demystify the legend that seating 13 people at a table would result in the death of one of them in the year to follow. They met on the 13th of the month and had dinner 13 people to a table, and to make matters worse, they purposely spilled salt on the table without throwing it over their shoulders. The horror! They also fined members who showed up late — 13 cents, of course. Members of the club included five U.S. presidents: Benjamin Harrison, Grover Cleveland, William McKinley, Theodore Roosevelt and Chester A. Arthur. I’m not sure if it’s worth noting that two of these presidents were shot — one fatally, of course — but I’ll mention it anyway. And, if you’re keeping track, Chester A. Arthur only became president because he was vice when Garfield was assassinated.

Sometime in the 19th century, the Royal Navy attempted to finally prove the old superstition among sailors wrong – that beginning a voyage on a Friday was certain to bring bad luck. To prove that this belief was wrong, they commissioned a ship named “HMS Friday”. Her keel was laid on a Friday, she was launched on a Friday, and she set sail on her maiden voyage on Friday the 13th, under the command of a Captain James Friday. She was never seen or heard from again. 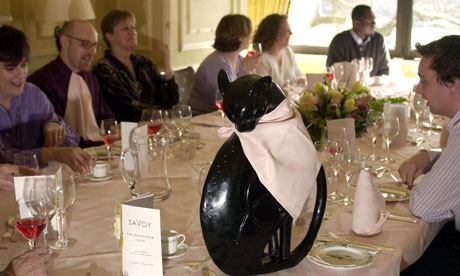 Kaspar the Savoy cat is a sculpture created to ward off bad luck. It has joined every dinner party of 13 at the Savoy restaurant in London in the last 86 years.
Kaspar’s tale began in 1898, when the diamond magnate Woolf Joel held a dinner party for 14 guests at the London hotel. One dropped out at the last minute, reducing the number of diners to 13, prompting one to predict that death would befall the first person to leave the table. Joel scoffed at the idea and left first. Weeks later he was shot dead.
Shocked by the news, the hotel invited staff to join tables of 13. This practice continued until in 1927 when the designer Basil Ionides created a 2ft-high feline sculpture to become the 14th dinner guest.

Some interesting links for further reading: